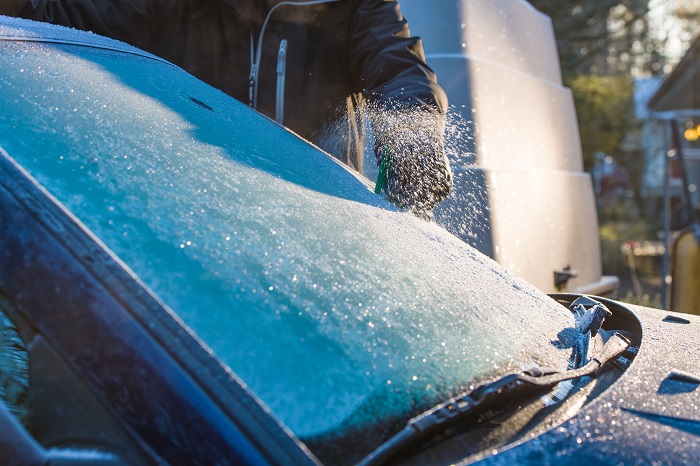 Ice on windows is one of the many things drivers hate about winter. Spending several freezing minutes scraping the ice off our windows is a sad, cold reality in Canada. Or is it?

Around December, you start seeing articles and videos on the Internet about tricks to prevent ice on car windows. You may be wondering: do any of them actually work?

Well, we had two enthusiastic testers give some of those tricks a try. Here are the results.

This hack only requires a spray bottle, water, and vinegar. All of which can be found in your own home. If you don’t have vinegar, it is inexpensive to buy; you can get as much as 4 litres for as little as $2 at some stores.

All you have to do is mix up a solution of 2 parts vinegar and 1 part water, and spray your windows liberally in the evening when you get home from work. The desired result is a window free from ice in the morning.

Elizabeth: “I mixed the vinegar and water in spray bottle, and sprayed ⅓ of the windshield liberally. It was so cold that the water in the mixture froze right away, which immediately gave me doubts. But I thought maybe something magical would happen overnight.”

When Elizabeth went out the next morning, it was clear that nothing magical had occured. She had to scrape off the ice that had formed.

Jane took on the rubbing alcohol hack we found on an automotive website. Billed as an ice preventer, fog preventer, and ice melter, it was 2 parts rubbing alcohol (Jane used 99% – not the 70% that’s more commonly available) and 1 part water in a spray bottle.

“I spent about 10 minutes spraying a thick coat of the mixture on all windows, when my car was still slightly warm from driving home, and the windows were wiped clean, as recommended,” Jane says. “I wasn’t optimistic; rubbing alcohol evaporates, and the water left behind would (you guessed it) freeze into ice.” 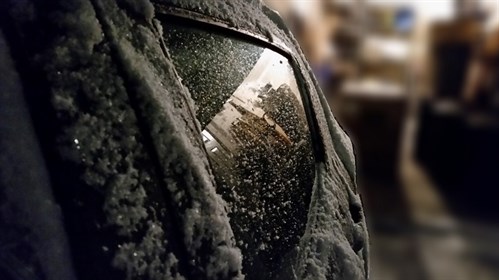 Frost formed on the car windows even with the treatment.

Jane was right. “I’ve tried this TWICE now and it absolutely does not work. When I went out in the morning my windows were covered in a thick layer of frost. It had the same amount of frost as our second car, which didn’t get the treatment.”

3. Towel Soaked in Water and Salt

Elizabeth took the reins on this experiment after discovering one car enthusiast who swears by the hack.

You take an old towel and soak it in water (however much it takes to fully submerge the towel), then sprinkle in a large amount of salt – Elizabeth used a ½ cup.

The towel is then applied to the windshield in the evening. In the morning, you peel it off, leaving your window free and clear of ice.

Elizabeth had a much different experience.

“I used a standard-sized bath towel, lukewarm water, and salt. I spread the towel over ⅓ of the windshield (to compare).”

“I’ll admit, I was really excited by the idea of taking off the towel and having an ice-free window. It sounded so easy! But in reality, the towel was frozen solid to the window, and it took me a lot of pulling, panting, and finally using the defrost in the car to get it off. There was no ice on the windshield, but it took me longer than it would have to scrape it.” 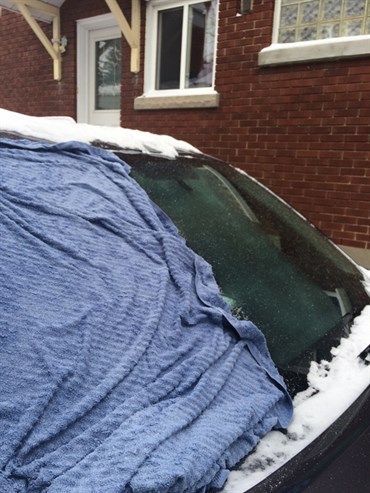 Tip: You may think that warming up your car will take care of the ice problem. Before you decide to let your vehicle idle, read this article on what it can do to your car >

Jane also tried a plastic windshield cover. These are inexpensive, and simple to use. Spread the cover across the windshield, make sure it is well tucked in on both sides of the car, and peel it off in the morning. And presto! The ice is (supposedly) gone.

“It kind of worked, but it was a pain the butt to do,” Jane explains. “It doesn’t cover all your windows, so you still have to do some scraping. It also takes a lot of time to set up and remove.”

It’s not just the setup and takedown that’s a pain. “It makes a mess inside your car when you aren’t using it; you have to put it somewhere right?” Jane explains that the cover would leave wet, slushy puddles in her car that were even harder to clean up.

“I wouldn’t recommend it for everyday use, or regular frost, but it’s fantastic if the forecast is calling for freezing rain, which can happen a lot in the winter here in Ottawa,” Jane concludes.

Tester Tip: If there’s going to be freezing rain, covering your mirrors with plastic bags secured by an elastic can help protect them, and make your morning a little easier on you. Jane has used this tip, and it works well!

Other Winter Windshield Tips and Tricks

While our testers weren’t entirely successful with their experiments, there are still some tips and tricks you can use to help with your icy window problems.

Car shelters look like big tents that you can drive right into. Chances are you’ve seen these at homes where there is no garage.

These are a fantastic investment if you live in a place that gets a lot of precipitation – this includes snow and freezing rain.

Shelters are a good option for your driveway, but it’s not something you can do everywhere you go. If your car spends a lot of time parked at home, this could be something you’d benefit from.

There are several weatherproofing products on the market, but at Bemac we recommend Aquapel. So we asked our co-owner Danny; does it prevent ice on windows?

“It doesn’t prevent it, but I find it does help with the build up,” Danny says. “Aquapel is used for repelling rain, snow, sleet and dirt.”

This makes it not only convenient for drivers, but safer.

“You’ll use a lot less washer fluid too because of how the dirt and precipitation simply beads off the windshield,” Danny confirms; this means your visibility stays consistent while you drive, which is a real problem with winter slush, salt and spray constantly being kicked up by other cars on the road.

A scraper is a staple in your automotive supply kit for a reason; it’s the only way to ensure your car can be ice-free in minutes.

Scraping the ice away takes effort, but it can be an invigorating mini-workout in the morning for the healthy commuter.

You Deal with the Ice; We’ll Deal with Everything Else

Ice is the problem that you’re going to have to deal with all winter, but we’ve got your back for everything else. Book an appointment with us to get your car the best care possible, no matter the problem.