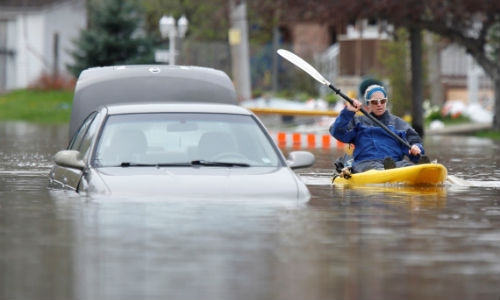 CSN-Bemac’s Gatineau branch, Carrossier ProColor Demers, is donating $15,000 to the Canadian Red Cross to help with emergency flood relief in Gatineau and other parts of Québec.

While parts of the Ottawa side have been affected, the Gatineau area and Montréal have been especially hard hit by flooding. The money will go towards helping families whose homes were flooded, and who require help with hotel expenses, food vouchers, and other basic needs.

“We are all deeply concerned by the flood,” said Bemac executive Danny Frangione. “And our hearts go out to everyone in the area who was affected. We think this is the right thing to do – these people are our friends, our neighbours, our customers and our employees.”

In late April and early May, the Ottawa area experienced much higher levels of rain than normal, adding to already high water levels due to spring runoff. By the first week of May, the area had experienced 20 cm of precipitation more than normal. Montréal, downstream from Ottawa, not only experienced the impact of our rising waters, but also especially high rain levels of its own.

By May 8, Gatineau was under water and hundreds had fled their homes, with help from the army, emergency responders, and volunteers. People were being carried to safety in boats. Exhausted residents and volunteers were still filling sandbag after sandbag in a desperate bid to stop the rise of water.

The waters didn’t peak until late Monday night, May 9. Since then the waters have started to fall, revealing total devastation. But water levels are not expected to return to normal for weeks, and many of the almost 2,000 Gatineau evacuees are not able to return to their homes.

Some residents are starting to clean up the damage, but will not always be able to make insurance claims. Emergency funding has been announced, but whether it will be enough remains to be seen.

We encourage everyone to donate to the Canadian Red Cross flood relief programs.