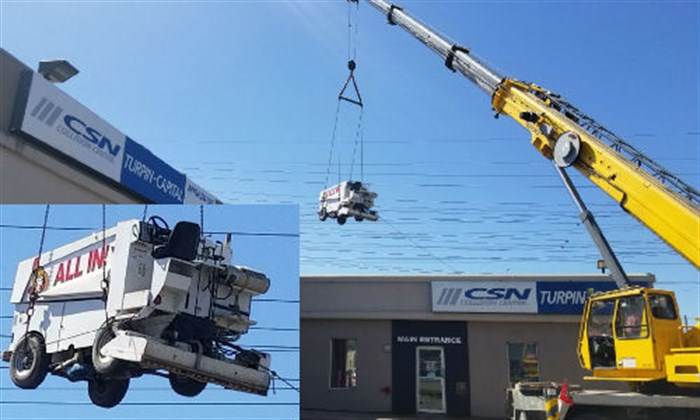 This past week, we hoisted something a little bigger than a flag into the air to support the Ottawa Senators in their game seven bid for a spot in the Stanley Cup finals. Instead of a banner of encouragement, we used the Senators’ zamboni.

How We Came Up with the Idea

The idea of using a fan zamboni, or ‘fanboni’, was born through a collective staff problem; we’d all left our Senators pennants and flags at home, and had nothing to show our support for the team.

This prompted a discussion about doing something a little different to cheer the Sens on against the Penguins.

How We Pulled It Off

Using a crane, we were able to hoist an actual Ottawa Senators zamboni over our Nepean location. It was easily visible, so that everyone passing by had no question about who we wanted to win this year’s championship.

A display of support such as this one did take some time to organize. Hoisting a zamboni into the air is a lot harder than flying a flag. However, the actual lifting of the zamboni only took about 20 minutes once the crane operator came on the scene.

The time-consuming part was getting the Ottawa Senators to agree to it. Once permission was granted, our co-owner Joe Frangione immediately contacted the crane company, who were very excited to be a part of the unique show of support.

The ‘fanboni’ was lifted high above the building, easily visible from highway 417. Many people reportedly slowed down in order to take in the sight, capturing pictures of our display of excitement over the Senators’ championship bid.

While we are saddened that the Senators will not be progressing to the Stanley Cup finals, we are proud of how well they did, and look forward to supporting them again next year!